In addition to many unusual and exotic species of trees and upwards of 10,000 annual plants and flowers, the Schedel Arboretum & Gardens maintains several themed garden displays where one will find unique presentations of plants and hardscapes designed to enhance the experience of appreciating nature.  Some of those themed gardens were originally designed and built by the Schedel’s and based on their many experiences from all over the world.  Other areas were designed and built after the foundation assumed operation of the gardens in 1989.
​ 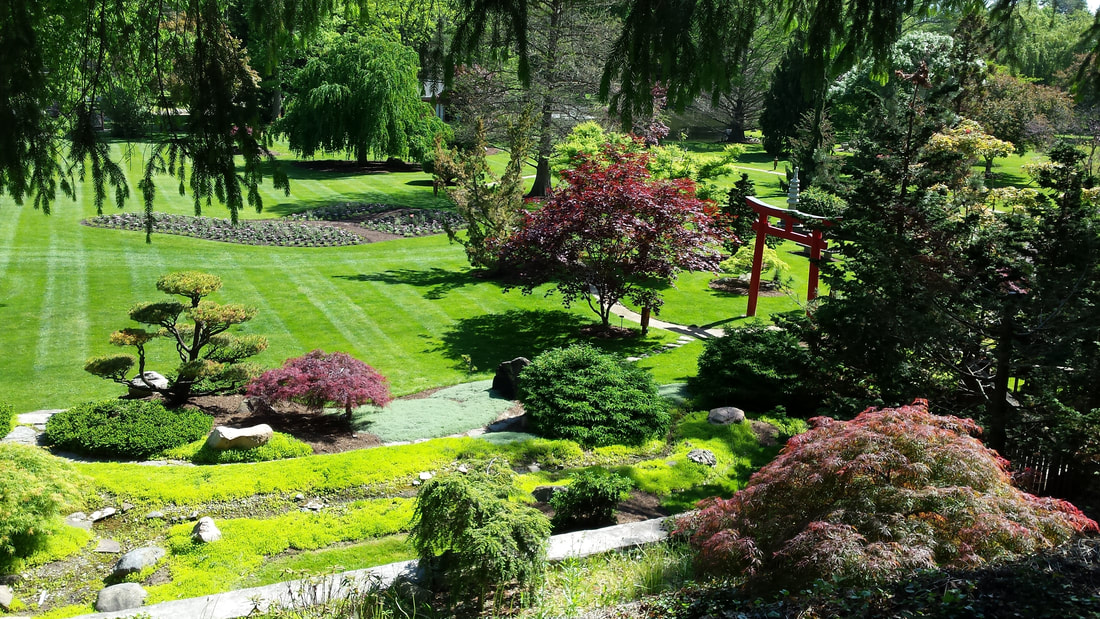 The Schedel’s began construction of the Japanese Garden in the late 1950’s.  It includes many of the elements typically found in Japanese gardens but does not follow strict design principals for any given style or period — rather, it represents the Schedel’s interpretation of a Japnese garden which have existed since at least 720 A.D..  There is a 30′ foot waterfall, stream feature, bridges and a Torii gate.  All are significant symbols in Asian culture.  The Schedel’s aquired and brought several different pagodas and lanterns that are displayed here, including one large pagoda on the periphery where the Schedel’s ashes are interred in copper box at its base.  Many varieties of Japanese maple trees and many unusual species of conifers adorn this area.​

The SA&G Rose Garden is a very popular area for visitors.  There are some 80 varieties of hybrid tea rose in the garden and many of those have been living here for decades.  Roses in the garden are irrigated from underground to avoid the leaves becoming wet making the plants more susceptible to disease

The Tropical Garden, located next to the Trellis Gallery, was revamped and expanded in 2010 and but reduced in size as a cost measure beginning in 2015.  There are several varieties of banana trees, and some 20 varieties of elephant ears, pineapple, several types of lemon, lime and pomegranate round out the display.  Also included in the Tropical Garden is the reflecting pool which is home to several varieties of both tropical and hardy water lilies, gold fish, koi fish, frogs and turtles.

Bonsai is the growing of an ornamental tree or shrub in a pot and artificially preventing it from reaching its normal size.  The art of bonsai was not prevalent in the U.S. until after World War II when American soldiers discovered the plants being grown in the South Pacific.  These plants can live for hundreds of years and are passed from generation to generation in the orient.  The oldest specimen in the Schedel collection, which numbers approximately 120 plants, was “born” in 1949.  The exhibit and shelter was named for long-time volunteer Leo Pelka who cares for the plants and provided the funding for construction of the new shelter in 2009 and an expansion in 2014

The Perennial Garden is located adjacent to the Manor House and provides a beautiful display of color year around.  Each spring, volunteers divide plants from this garden and they are displayed for sale near the vegetable garden.

The Iris Garden located in the western portion of the upland garden area was replanted in the fall of 2012 with several new varieties of plants that should provide quite a show of color in mid- to late-April.

​The Peony Garden is located adjacent to the Iris Garden and is home to more than 40 varieties of this early summer bloomer.  The large colorful flowers will last from 1 to 6 weeks depending on the variety and conditions.  There are a couple varieties growing here that were hybridized by Marie Schedel.

A special opportunity for learning about nature as an abundant source of food is on display annually in the Schedel vegetable garden.  Board member, former director and now volunteer Dr. Reg Noble plants and cultivates the vegetable garden.  Crops change from year to year but normally included tomatoes, cucumbers, carrots, spinach, cabbage, long bean, sweet peppers, potatoes, broccoli, brussel sprouts and much more.  Vegetable harvested from the garden and given to volunteers and staff and are not normally available to visitors due to potential liability concerns.